RT @GertjanPlets: Job! Because of our new MA Cultural History and Heritage we are looking for an assistant professor in heritage studies @C… 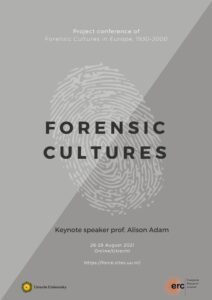 On 26-28 August 2021 the FORCE conference ‘Forensic Cultures’ took place. The enthusiasm of all the participants and the high quality of the papers ensured lively discussion. The conference connected scholars and sparked ideas for further research.

The theme of the conference cut to the heart of the FORCE project that examines to what extent culture determines the impact of forensic experts (physicians, psychiatrists, scientists) in European courtrooms in 1930-2000, particularly focusing on the Netherlands, England, Spain and Russia. The project’s hypothesis is that perhaps more than the availability of technology or the differences between accusatorial and inquisitorial legal systems, culture can explain the role of scientific experts in the courtroom. In our project we define culture as pertaining to political ideology, media representations, and norms on gender and sexuality. We are building on important earlier research into the history of forensic science and medicine: scholars such as Ian Burney, Chris Hamlin, Katherine Watson and Alison Adam have already shown how legal frameworks, forensic institutes, technology and culture were entangled in the past (see our bibliography). During our conference we aimed to explore how specific locations, countries, political regimes and cultural contexts shaped forensic cultures. In practice, this led to many papers discussing national forensic cultures. One of the conclusions at the end of the conference, therefore, was that we need to pay more attention to transnational forensic cultures, and other units beyond the nation state such as regions or the Spanish-speaking world.

Our fabulous keynote speaker, professor Alison Adam, presented a fascinating Scottish paternity case from 1958, in which the court ruled that a man, who had been excluded from paternity by his blood group, was the child’s father. Adam discussed the increasing scientific acceptance of blood typing in the 1940s and 1950s, yet also pointed out how in the late 1950s fingerprinting still seemed much more reliable. Adam also addressed how gender norms were interwoven into the construction of scientific and forensic objectivity. The paternity case testified to the image of problem families, neglected children, absent fathers and mothers who were blamed for this. Also, women were often presumed to be deceiving, just like in rape cases. Adam described ‘feckless’ (grand)mothers as blame figures onto whom anxieties about class and eugenics were projected.

Especially in the panels on infanticide and rape gender came to the fore. Siska van der Plas showed how in Dutch newspapers and courts much lenience was shown for murdering mothers as long as they demonstrated confusion, despair, mental illness, and appropriate remorse. Increasingly, from the 1980s, reporters showed more sympathy for fathers’ sense of powerlessness, corresponding to new ideals of fatherhood. Sara Serrano Martínez focused on the role of physicians in the Spanish courtroom during the Franco regime, especially on the way these experts and judges framed the judgement of ‘lack of care’ for the newborn child by the mother as a criminal act. Serrano Martínez explored whether this can be interpreted as part of a generalized judicial deference towards medical experts in the Francoist forensic culture or as an effect of the punitive attitude of Francoist prosecutors and judges towards women who committed infanticide.

In the panel on sexual assault, Stephanie Wright also demonstrated the importance of the political and cultural context by looking at Francoist Spain. She argued that the prestige of modernity and objectivity surrounding medical evidence meant it was used by the defence, but that its ambiguities were frequently exploited in the courtroom. At the same time, victim-survivors of sexual assault could use medical evidence ‘as a potential shield against the well-known arbitrary nature of the Francoist justice system’.

The importance of looking at political ideology was underlined by Volha Parfenchyk who introduced ‘jealousy murders’ as prosecuted in Soviet Russia. The Marxist-Leninist condemnation of private property implied that emotions such as possessiveness, egoism and jealousy were out of bounds. Parfenchyk however argued that ideology was not the only factor that determined the formulation of the laws: legal scholars, psychiatrists, and the judiciary also influenced the shape of the laws and their application in practice.

Practices, particularly the discrepancies between scientific discourse and legal practice, took centre stage in a number of papers. Lara Bergers, for example, critically discussed the rape myth that victims (mostly women and children) lie by looking at the intricate practices of the pre-trial investigation of Dutch cases of sexual assault. Franco Capozzi, in turn, showed how medical expert witnesses in the Italian courtroom in Liberal and Fascist Italy (1910-1930) were aware that the jury and judges held Lombroso’s criminal anthropological theories in disrepute and therefore had to ‘disguise’ their scientific approach in order for their forensic medical conclusions to be accepted. Forensic practices could thus diverge from scientific theory.

This also brings to the fore the importance of the practical performance of forensic experts, for instance the way they were dressed. English forensic scientists in 1920-1950 adopted a neutral ‘Mr. Everyman look’ by wearing a dark-coloured lounge suit, the common custom for most British middle-class men. In her paper Pauline Dirven argued that this neutral ‘Mr. Everyman look’ was a key feature of the performance of forensic expertise because it allowed experts to embody one of the crucial elements of modern forensic culture, i.e. the epistemic virtue of impartiality. Thus, we should add ‘fashion’ to the elements defining forensic cultures.

How the notion of ‘forensic culture’, which mostly addresses the role of forensic doctors and psychiatrists in criminal court cases, relates to forensic anthropology -the latter also covered by several conference papers- will be explored in another blog post on the ‘forensic turn in the humanities’.