Staying with the theme of animals, this article of the Royal College of Pathologists gives a very interesting consi… https://t.co/tDsWLgs8r3

And last but certainly not least, we have Maggie (short for Magpie) - the cleverest girl of our team, who will live… https://t.co/YL6JwAm76C

RT @victoriansleuth: Quick question for crime/police historians: does anyone know that ‘tg gr’ means in the hair colour section of the Metr… 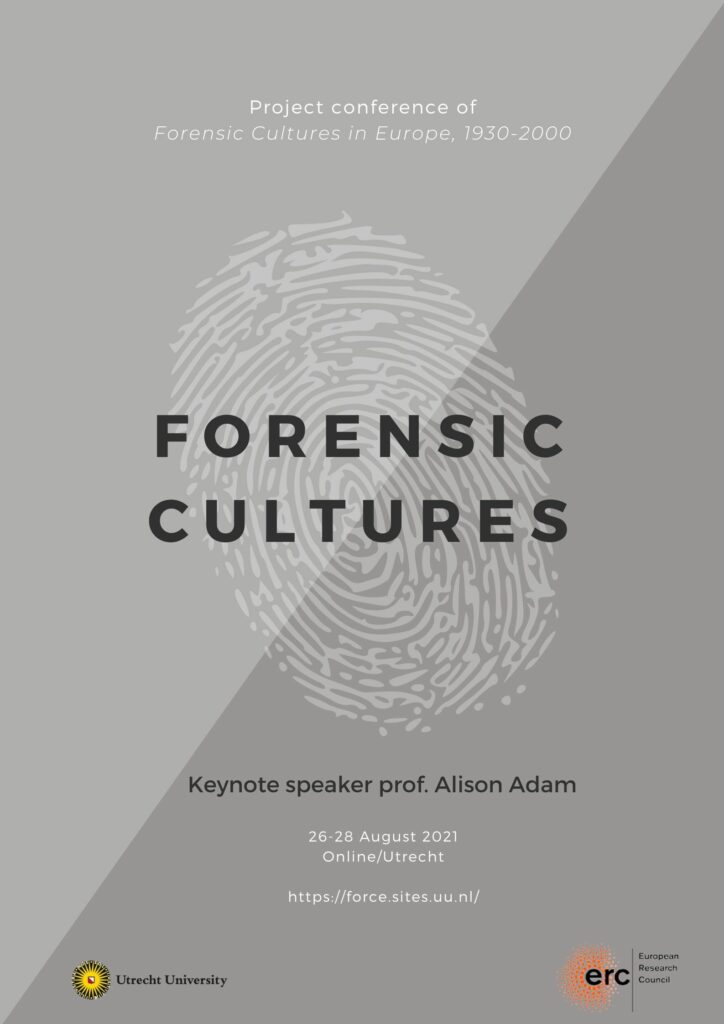 On August 26-28 2021, Utrecht University will be hosting the conference “Forensic Cultures”, an international online conference on the critical study of forensic cultures. This conference is part of the ERC-Consolidator project “Forensic Cultures in Europe, 1930-2000”. The updated programme can be found here. A PDF of the programme including speakers’ biographies and abstracts can be found here. The program is based on the Central European Timezone (CET/GMT+2).

In recent years research into the history of forensic science has expanded. In addition to institutional developments and advances in technology, increasingly the entanglements between legal frameworks, forensic institutes, technology and culture have been explored by historians and scholars from other disciplines. These entanglements come together in the notion of ‘forensic cultures’, which may be defined as the theory and practice of forensic science, medicine and psychiatry as they come to the fore in specific locations such as the courtroom, the mortuary, textbooks of forensic medicine, psychiatric assessment reports or the media. Moreover, these forensic practices are embedded in cultural contexts and political regimes. Forensic cultures can thus refer to both the representation and the practice of forensics. The conference aims to explore these different forensic cultures through a critical review of its constituting components and through different lenses such as Science and Technology Studies, praxiography, new materialism, history of knowledge, cultural theory, critical legal studies, and gender and queer theory.

The programme will feature keynote speaker professor Alison Adam who will be discussing blood typing, gender and forensic objectivity. Abstract:

“Blood has always held a special cultural interest long before it was a subject of scientific interest. We talk of ‘lifeblood’, bloodlines and being related by blood. In terms of human relationships, the development of blood typing from the early twentieth century onwards was to become vitally important in disputed paternity cases. Yet, on its own, it is not possible to prove unequivocally that a man is the father of a particular child by blood typing. The only outcomes are that the man could be the father or that he is definitely excluded. The 1940s and 1950s are of particular interest as, in this period, blood typing was becoming accepted scientifically but it was before the time where probabilistic estimates of paternity became available (and before probabilistic estimates were more generally used in court). Why, then, would a court of law, in the middle of the twentieth century rule that a man, who had definitely been excluded from paternity by his blood group was the child’s father? In this talk I argue that we need to look to the ways in which societal norms of gendered behaviour, and in particular the behaviour of women was inextricably woven into the construction of scientific and forensic objectivity. I consider two paternity cases where in both cases the putative father was excluded by blood typing yet the court ruled that he was the father. The first was the high profile paternity case of international film star Charlie Chaplin in the 1940s, the second was a case in 1950s Scotland. In addition to gender questions the latter case shows an interesting divergence between approaches to forensic evidence in Scotland and England.”

Other contributors will focus on local, national or transnational forensic cultures from the perspective of new empirical research and different theoretical approaches.