RT @GertjanPlets: Job! Because of our new MA Cultural History and Heritage we are looking for an assistant professor in heritage studies @C…

Dogs as superheroes: The transformative training of the first Dutch police dogs 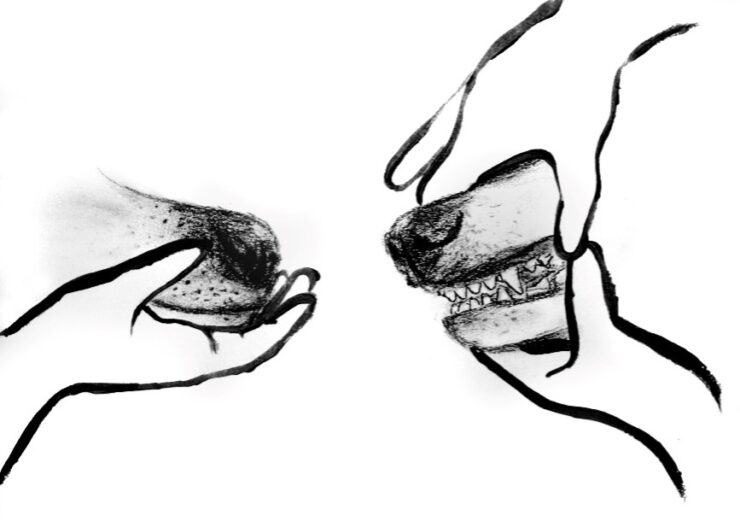 This drawing for the project illustrates the seeming duality in relationships between dogs and people, as well as the centrality of the police dog’s nose and teeth for its work. The right side could show a snarling dog, as opposite to the one on the left, but could also be a dental health check.

Dogs are used by the Dutch police in many different situations for their agility, superior sense of smell or imposing flashing teeth. The tracking and surveillance dogs that perform these jobs are expected to be trustworthy. They should learn to control their instincts. Manuals from the 1910s show that the handlers of the first Dutch police dogs expected even more from the training process. The dogs supposedly would not only become useful tools for the police, but a kind of ‘superdogs’ in the hands of their trainers. Although the centrality of the relationship with humans might have limited the dogs’ credibility in court, the partnership proved to be valuable in the field.

At the end of the nineteenth century, across Europe dogs began to be used for criminal investigations and arrests. In the Netherlands, this trend partly coincided with a development towards modernisation in criminalistics between 1910 and 1930. Experts in criminalistics experimented with new methods based on the natural sciences for legal prosecution, sometimes in cooperation with policemen. The police dog Albert was for example used to literally sniff out the perpetrator in a 1918 murder case by comparing the scent of suspects to that of the murder weapon. This test was not mentioned in the verdict however, which shows that the judges had some doubts about the use of a dog for this purpose. Variations of such sorting tests were contested until they were abolished completely by the Dutch court in 2011. For the most part, police dogs were (and are) used in the field to track down suspects or aid their handler in arrests.

We can learn more about the philosophy and practices of the first police dogs’ training from dog training manuals written by Chr. F. Hössen, P.S. Gerlings and M. Kessler. All three were published between 1911 and 1913, which is within five years after the first use of a police dog on a case. They present an ideal of absolute obedience, stating that only dogs that obey in all situations deserve the title of police dog. At the same time, the authors have to admit that some instinctive behaviours, like chasing cats, cannot be controlled. The books thus contain a contradiction between viewing the dogs as rational beings that can become perfectly trained, or as wild animals that simply follow their instincts.

The dog training methods that are described in the manuals reflect this dual view. If the dog is thought to be reasonable, then communication and understanding are part of the training process. If, on the other hand, dogs are viewed as wild animals, the relationship will most probably be more about control and discipline. A concept of the philosopher Donna Haraway can aid us to see past this dualistic divide. Instead of having a relationship of either control or communication, the handlers and dogs engaged in a ‘dance of relating’. She sheds light on the agency of both the human and the animal within the relationship, as well as how both species shape each other. The manuals advocate for absolute obedience, but simultaneously reveal a more nuanced view on the dog-handler relationship:

If one wants to be a truly good trainer, one must not try to mould everything according to human terms, and not try to transfer thoughts, created in the human brain, to the animal by force. […] Only he, who can imagine himself in the mind of the dog, can understand him, and he who understands him, can be understood by him.

Furthermore, the imagined result of the training was not only the (unattainable) ideal of an absolutely obedient dog. The ideal police dog is courageous, dutiful, loyal and even has a sense of justice. It shines through from the manuals that a regular dog, although one that was well-bred and had potential, could gain these traits through training. The police dog is considered an animal with an individual, superior character that stands out from the rest of its species. As such, the animals were not just useful tools during arrests or manhunts for their handlers, but also companions.

The relationship between dog and handler was thus central, not the dog itself. The dog could only move beyond its wild animal-status through the training process. It could well be a consequence of this view that police dogs were not seen as reliable evidence in court. Implicit in the need for training to turn untrustworthy, regular dogs into police dogs is the acknowledgment that the animals needed human involvement to become reliable tools. Therefore, they could not be considered ‘silent witnesses’, as criminologist Hans Gross described objects from a crime scene that displayed traces of evidence. The dogs were made to talk by humans. This might account for their use as partners in the field, instead of as proof in the courtroom. The close relationship between dogs and humans was beneficial for their functioning as a team, but not for their credibility in providing objective evidence in a court case. 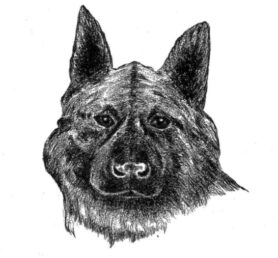 Police dog Albert as portrayed in The great deeds of Albert the dog (1948).

The great deeds of Appie

The aforementioned police dog Albert (or Appie) from Amsterdam illustrates the close relationship between handlers and police dogs. In The great deeds of Albert the dog (1948) chief constable Water writes about his experiences as Albert’s handler and, in his own words, lifelong friend. According to Water: ‘He had a human mind, this Albert, only human speech was lacking in him.’ The pair experienced many adventures as they recovered stolen objects, tracked missing persons and arrested criminals.

In each thrilling tale, Albert is the superhero. Somehow, the dog sees through the wiles of suspects. For example, he leads Water the right way in a case where a hairdresser started a fire in his own house and reported it to get insurance money. His handler even believed that the dog could discern between good and evil: ‘He [Albert] was grim and short with real criminals, while occasional violators of some article of the law could count on “humane” treatment from his side.’ Albert was not just a well-behaved dog, but a true companion to Water with a sharp mind of his own.

The hero’s journey of a dog

Albert was the ultimate police dog if we can believe the stories about him. Firstly, he obeyed his handler Water in all kinds of dangerous situations, as is generally expected of police dogs. Secondly, he demonstrated certain character traits central to the ideal of the police dog with his sense of duty, loyalty and morality. The process of negotiation between human and dog during training was thought to inherently change the dog, if not the human. The ‘dance of relating’ between them would transform the dog not just into a useful tool, or obedient helper. The dogs were supposed to perform their task well of course, but the ultimate goal for police dog training was more ambitious: to turn a regular dog into a companion, or even a superhero.

Understanding the multifaceted view on dogs helps us understand why they were used in the field and not the court room. Forensic science research should thus not try to explain why certain methods were used historically only based on effectiveness or rational arguments, but take into account intangible ideas and gut feelings about the nature of the tools used. In the case of police dogs, the idea that dogs were by nature unreliable and could only be made valuable partners through training limited their usefulness. The dogs might have played a contested and limited role in providing objective evidence, but their use by policemen up to this day proves their continued importance.